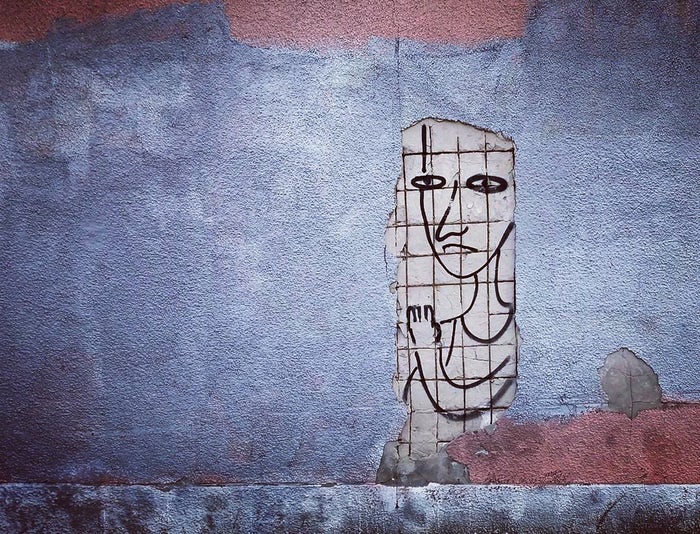 Mental illness runs in my family.

Addiction and suicide are rife - My fathers side mainly.

I have his hair. And the same blue/grey eyes. I wonder if this counts? That one day this will be enough to tip me over - and I get to join the ranks of all of those who came before me.

They grew up in and out of care, my fathers family...Seven institutionalised adults  came churning out of the machine after my nan decided that she didn't much like children after all once they'd arrived. I can only imagine the damage that did to them all...I can't even begin to imagine how that must have felt.

My Aunty Sheila was the worst affected. She was legendary in her madness. We used to hide from her, the three of us. My mum, my brother and I.  Whenever she came to call on one of her random visits. Having apparantly walked for miles... with nothing on her feet, dressed in a dirty fur coat and probably very little else.

We didn't really know what to do with her; the times that my mum had to let her in because she wouldn't go away. The occasional cup of tea and stilted, non-sensical conversation and then that would be that... Then off she would go to wherever it was that she went when she wasn't desperately trying to re-connect with her family  - and my brother and I would crawl out from behind the sofa.

She died alone in a bedsit. She'd been there for weeks. Nobody even knew she was there...or didn't bother to check on her if they did.

It fills me with shame that she died in this way. Her loneliness must have been overwhelming.

Her brother, my uncle Bill had one row too many with his wife. She'd been having an affair.

It was the final straw.

He chose electrocution..Ceiling wires in the bathroom. Not the easiest way to go I would imagine.

By the time they'd broken the door down it was too late to save him.

Another of my uncles wasted his days in a drunken haze on the streets of London.

He was a gambling man, a waster, a womaniser... Someone you would pretend not to see if you passed him on the street.

He drank himself to death. I doubt that he was missed by very many. He owed far too much money to everyone.

Presumably  the stress of battling his own demons, along with juggling  a wife and two kids that he didn't really know what to do with in a marriage that wasn't working  at the time all got a little too much for him.

So I don't come from the greatest of gene pools.

My family history makes me shudder.

I'm related by blood to each and every one of them.

I look back at my own horrific mental health years and can only pray that my reaction was a normal one. That my crossover into addiction and complete mental breakdown was to be expected, once my own burdens at that time became too heavy to bear. That I'm not carrying around a horrific kind of  timebomb that is currently lying dormant in my head. Just waiting for someone or something else to start the clock ticking.

As a child I was bewildered.

As an adult I wish that I could take all of those negative thoughts and reactions back.

All of those people - my people were ill. They needed help. Not a bell around their necks announcing to all and sundry to keep clear.

Because mental illness is just that. An illness... That lives in your head. It's crippling and debillitating and can be difficult to overcome.

My Aunty needed help...desperately. Instead she was talked about, pointed at and became the butt of peoples jokes.

I can't help my Aunty -  Or the rest of my family for that matter. Without exception, as far as I am aware apart from my mum, my brother and me they are all long gone.

But what I can do is shine a spotlight on Mental health.

I can write about it.

This shocking, stigmatised subject that is everywhere and nowhere, depending on who it is that you speak to.

Because it is here.

It walks amongst us every day. No one on this planet is immune from it. Its tendrils touch us all... Every man, woman and child, and It wrecks lives with its relentless all consuming appetite for destruction.

It went through my family like a wrecking ball. But I'm fighting back.

I don't want to live my life like my family before me. Battling  those inner demons and monsters in my head. So to the best of my ability I won't.

I'll write and I'll eat well and get plenty of rest. I'll deal with problems as and when I need to and try not to overthink things.

I'll try and keep things in perspective. Choose my company wisely. Be a nice person and do what makes me happy.

None of these things individually are going to be the key to my wellness. In no way shape or form are they going to protect me from any nasties in my future designed to rock my world. But they are a start. Something I can cling on to in the quest for emotional stability.

Because I don't want to live the rest of my life haunted by the ghost that was my late Aunty Sheila...

mental health anxiety not the slide me myself and i