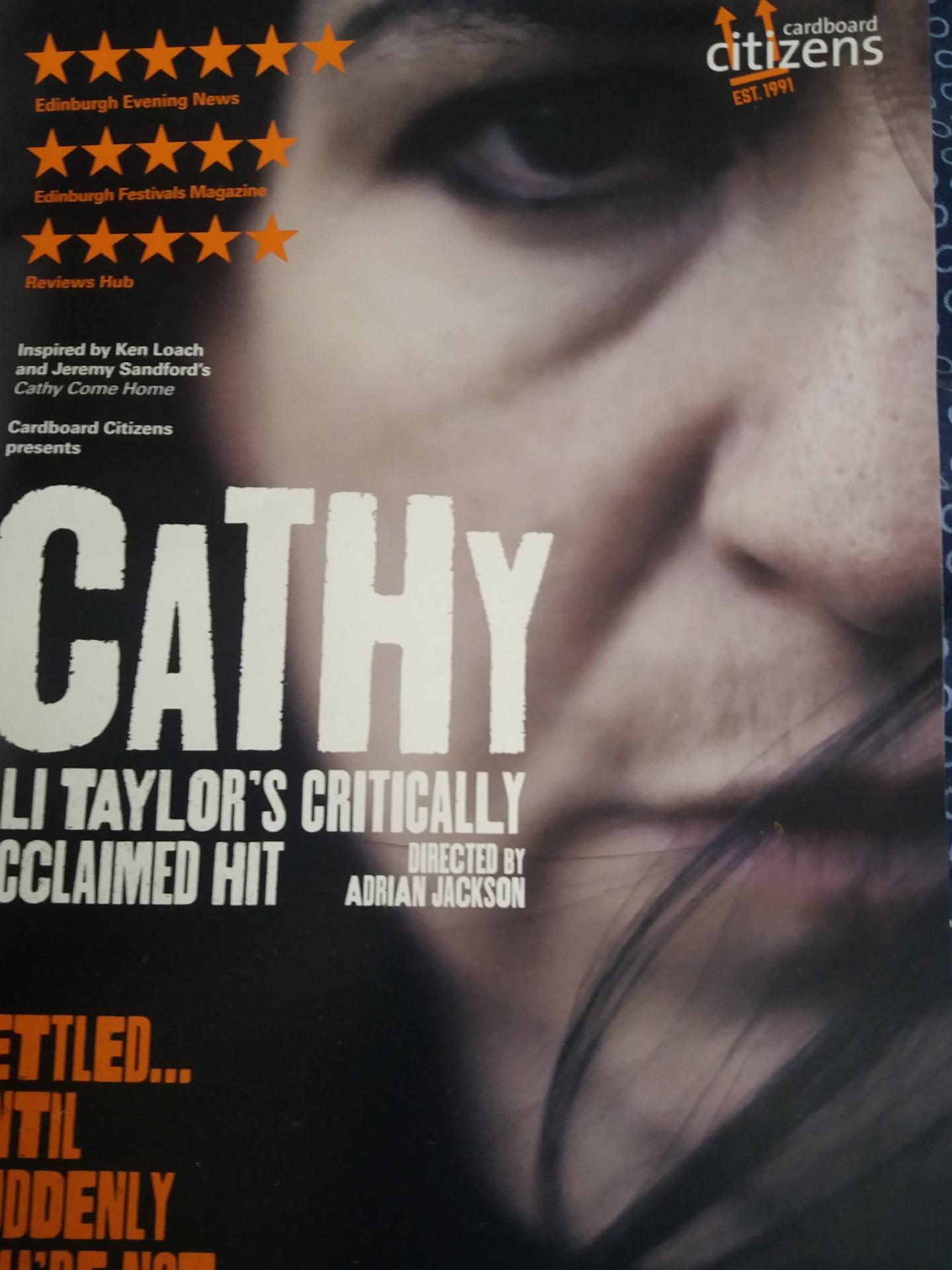 She's lived on the estate for 40 years; she knows everyone and everyone knows her, it's her home and no one can take that away...can they?

And they don't stop. Until they've taken everything......

You can hear a pin drop here.

The atmosphere is electric. People all around me barely daring to breathe, as all eyes are fixed... firmly stage front and focussed on her...

This incredible, one woman fighting machine, as she attempts to cling onto her home, her life, her daughter and herself against a system that is flawed, inadequate, and at times seemingly gives precisely no shits, as life as she knows it is taken away and she's out on the streets.

The majority of the audience around me in this packed out theatre were in bits. Because this shouldn't happen... not just to Cathy, but to anyone.

It's happening all around us, in our towns and on our streets, every single day. And we see it on the news and then we read all the statistics and we think that we know about homelessness... and then you see a play like this, about a woman like this, who's heart has been broken, first by life, and then by the system.... and you realise right there and then, at that very moment, as Cathy's life is ripped apart in front of you, right before your eyes, that you actually don't know shit.

And Cathy nails this.

Ali Taylor's visionary re-working of Ken Loach and Jeremy Sandfords "Cathy Come Home" is harrowing. It's raw, it's real and it's heartbreaking.

It's also breath-taking in its brilliance, shining the spotlight both on homelessness and a flawed housing and benefit system, so hard and so brilliantly that the audience are literally transfixed rabbits in its headlights... There was absolutely no leaving that theatre without Cathy's story being emblazoned on your soul, and the questions "What can I do/ how can I change this?" tattooed upon your heart.

Directed by Adrian Jackson, and presented by the cast of Cardboard Citizens, Cathy is a gamechanger, showing firsthand how quickly and easily things can go wrong, if, for whatever reason, fate suddenly decides to deal you a shit deck of cards.

I saw this play weeks ago. I can't get it out of my head...and I defy anyone who sees this not to be moved to tears, angered, frustrated and a just little bit broken by writer Ali Taylor's phenomenal take on this play...commisioned by Cardboard Citizens to commemorate 50 years since the original critically acclaimed "Cathy Come Home" made its debut.

I knew exactly what this play was about when I went to see it...I knew that it would be emotional. It still absolutely blindsided me.

There is a line in the play where a lady tells Cathy that "the world will kick you when you trip". Well the world kicked Cathy. Over and over and over again. And then it went back for more.

And Cathy's desperate attempt to keep treading water against a system that isn't designed to keep you afloat absolutely broke me. It broke a lot of people in the audience that night.

And be prepared to never look at a homeless person the same way ever again when you come out of that theatre.

All other female roles - Amy Loughton

Cathy 2018 UK tour 17 March - 5 May Presented by Cardboard Citizens, who have used theatre for more than 25 years to raise awareness around homelessness and to inspire change, performing in theatres, but also in hostels, day-centres and prisons around the UK.

Based in London, they run projects and workshops and provide accredited training that reaches hundreds of homeless and at risk people every year...And now, with Cathy, they are asking us to ask ourselves this question, "What can I do...what can I do to help to tackle homelessness?" via their latest initiative "Citizens Do". Because you can always, always do something.....

To find out more, visit CitizensDo.com now and join the revolution....